This piece is Part 1 of our live challenge – The challenge is to create one blog post for a B2B company on our email list and promote it for them. The goal being to drive more traffic to this blog post, in a 30-day period, than they get on average to their other existing blog posts. The following post will explain how we executed on this for the company – starting with how we came up with the content idea for the post. If you want to follow along, you can join our email list here.

When we decided to do this challenge, we wanted to show readers how to solve a couple of common problems they’ve told us they have regards to content marketing.

In Part 1 of this series (this post), we’ll share our process for how we came up with a content idea that will strategically attract customers for TAR Productions. Again, if you didn’t read the last post, we selected TAR out of 86 B2B companies that applied to this contest on our email list.

Step 0: Analyzing The TAR Productions Blog and Determining How to Improve it

Devesh and I got together at Starbucks to go through all of the applications for our contest and pick a winner. The criteria for the winner was: a company that we had no past relationship with and a company in an industry that neither of us had worked in.

TAR Productions stood out to us because they were driving higher than average traffic to their posts already. Their top 10 posts were ranging between 269 monthly visitors and 1395 monthly visitors, which is a slightly higher range than most applicants, who said they averaged 300 visitors per month, per post. Most of TAR’s traffic was coming from organic search.

The challenge that they were facing was that Tim Ryan, the Founder of TAR Productions, was writing good posts, but the content as a whole, wasn’t driving steady leads from qualified prospects (again, a common problem that many applicants and readers have mentioned to us).

In particular, we noticed that some high traffic posts on their blog were attracting competitors and not TARs customers. 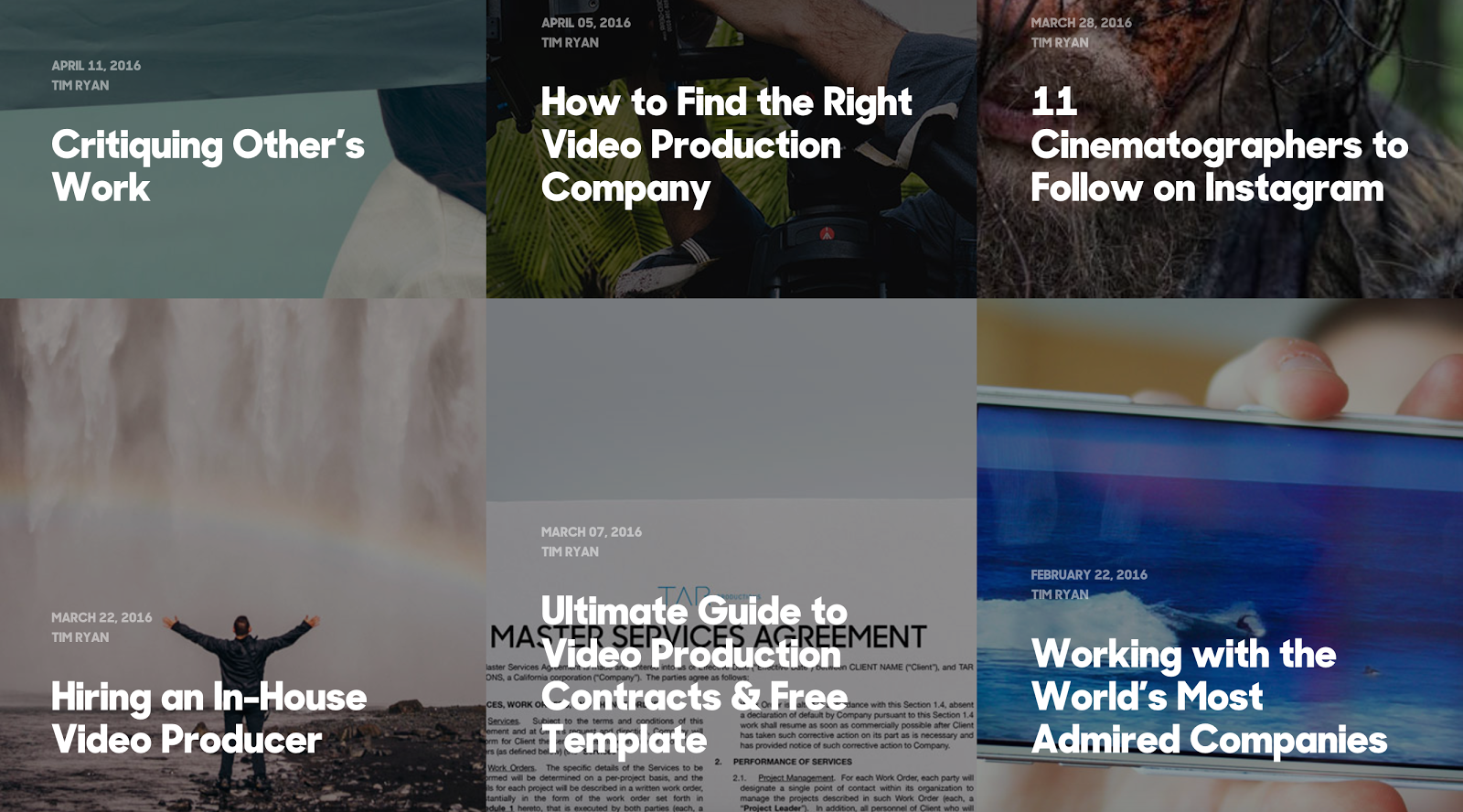 This is actually an extremely common challenge that many B2B companies we’ve worked with have.

So we wanted to focus on building a content strategy for TAR Productions that would attract more of their ideal clients (instead of just competitors). In order to do this, we needed to chat with TAR and learn about their customers — both who they are and what their pain points are — so we could make sure our content focuses on real pains, questions, and interests that their customers have.

Step 1: Narrowing down who the best customer is

Step one of our process of determining a content idea that will attract the right customer for TAR Productions is to sit down with the company and determine who their best customer is.

This isn’t as easy as it sounds.

Typically when we ask companies, “who is your best customer?”

We get a generic response like, “We sell to salespeople in companies ranging from 50-5,000 employees.”

You may think that’s specific enough, but it’s not.

The challenges with an answer like that are that:

1. It’s an extremely large customer base to try to target with content marketing

2. Just because someone pays you money, doesn’t mean they make a good customer

In addition, if you target any customer, sales usually starts complaining about having to talk to unqualified leads from the blog… and we don’t want that to happen.

Best Customers vs. Any Customers

So, what’s the difference between a best customer and just any customer?

Best customers are typically companies that :

Any customer is someone who might pay you, but doesn’t fulfill one or more of the above criteria.

How to filter down to your best customers

To determine a company’s best customers, we look at a combination of company sales history and get qualitative evidence from people on the sales team, account management, and the customers themselves.

For this challenge, we applied a highly shortened version of our process to determine who TAR Productions’ best customers are. We conducted a 60 minute conversation with the Founder Tim. This conversation gave us enough to produce one content idea that has the potential to attract more qualified leads, which, after all, is the purpose of this challenge.

Here’s an inside look into our questioning with Tim:

We asked Tim, “Ok, who are your absolute best customers? Like the ones you love working with? And the ones you produce the best videos for?”

At first, it was hard to get him to open up about this. Tim had done a wide range of projects – from startup product videos, to documentaries about the SDSU basketball team, to crafting commercials for large action sports companies, to telling stories about companies who help amputees get their limbs back, and telling stories about nonprofits to help them raise funding.

Tim said that all of them were good projects in their own ways. Some were higher in price, some were longer engagements, some challenged him in different ways and some were more fun.

Tim shared that he had never been mindful of thinking of his customer base through the lens of what customer is that absolute best for him (or the dramatic insight it provides to marketing your business).

So we had to take another approach to questioning to get what we were looking for.

This is a small example of how deceivingly difficult this exercise is in narrowing down your customer base to your absolute best customers can be. It sounds like it should be easy, but our experience shows that time and again, it’s not.

We asked a series of questions to try to get him to a specific answer. Some of the questions we asked were:

This did the trick.

After 60 minutes of open-ended questioning (and Tim showing all kinds of patience), we went from a broad idea of his customer base (“a company that needs a video”) down to a more specific idea of his best customer (“nonprofits and purpose driven businesses, typically family owned and operated.”)

When we narrowed it down to that segment, we asked Tim to give us some examples of projects he’s done that met that segment, and that’s when the story idea started to come to light.

A lot of the content currently on Tim’s site was about video production, and we wanted the story to stand out, be different, and still attract his customer base.

For example, one of the highest traffic post on his site was this:

While the post has done really well — it has 854 shares, it ranks for terms like videography contract, contracts video production, etc. and gets around 1,300 visitors per month (mostly organic) — we confirmed with Tim that it’s attracting the wrong audience for his blog.

So the challenge was to come up with a story idea that explained the value of his video production service to his best customers, and that is still genuinely interesting to them. For example, we could do a deep dive into how to set up a video production set, or edit video, but our hypothesis was that those details of production simply aren’t interesting to non-profits and purpose driven business owners who don’t care about editing and lighting. Important pain points for them are more along the lines of raising funding or attracting more customers.

When we decided which content framework we should use for this story, we decided to go with a narrative, because those types of stories build trust with readership and typically drive lots of traffic.

For those that aren’t familiar with narratives, they’re just stories that would be generally interesting to your target audience — kind of like How KlientBoost scaled from $0 to $1M in 12 months or How Examine.com Founder Sol Orwell Built A 7-Figure Business Off Of Reddit on our site.

Being that TAR Productions wanted to focus on purpose driven companies (think Patagonia, Toms, etc.) and nonprofits (which are almost always purpose driven), we needed a story angle that would attract those kinds of people. When Tim started explaining some of the clients he’s worked with, there were two companies we thought had fascinating stories worth telling.

The first was a prosthetics company that helps war veteran amputees get their limbs back. The owner is a prosthetists that was contracted by the military and left to start this business on his own to provide his patients with the level of care they needed to live comfortably. This business really put the “purpose” in “purpose-driven”. The video that TAR made for them was to help get his message out to anyone who needed a limb.

The second company was a nonprofit that was formed after an American couple found 35 abandoned kids in Haiti while on a mission trip, and used the video to help raise funds to grow a nonprofit they started to help Haitian children. Tim told us that they had a lot of success fundraising with the video his company made for them.

The commonality? Both of these examples involve a story of how a non-profit or purpose-driven business accomplished one of their highly important goals using Tim’s services.

Thus we thought that either story would be of interest to people in his target audience (other purpose driven businesses or non-profits) and would be something that Devesh and I (whose video production expertise consists of shooting 10 second clips of Devesh’s dog catching treats on our iPhones), could actually execute.

Most companies talk about themselves too much which dilutes the trust of the story with the reader.

The key to making this story successful was to tell the story about the nonprofit, and what they were able to achieve, while not over promoting TAR Productions as the hero of the story.  We find that this is what most companies fail at when trying to write narratives- they’ll try to talk about themselves too much which dilutes the trust of the story with the reader. For a narrative to have an effect on the reader, you need to make someone else the hero of the story and they’ll naturally view you as a thought leader in your industry for sharing a story about someone else.

After watching both videos about the two companies and talking to Tim, we decided to write our piece about the second company (the Haitian children non-profit) and how they were able to raise over $2M in funding by leveraging the video they created to get their message out to a wider audience.

In Part 2 of this series, we’ll share how we executed on creating the piece of content for TAR Production. For example, how we were able to get enough information to write the story, how we drafted the outline, and how we wrote it.

Then in Part 3 of this series, we’ll share how we identified promotion channels for this post and then also analyze how it did from a traffic perspective compared to their other content.

Want us to write an in depth case study or story like this about you or your company? We’ll also drive traffic to it. Apply here.

We send in depth articles about content marketing about once a week. No list posts, no high level stuff.

It's free and marketers at companies such as Salesforce Desk, PayPal, and Cisco have joined.